An afternoon with Cherie Booth and Matrix Chambers 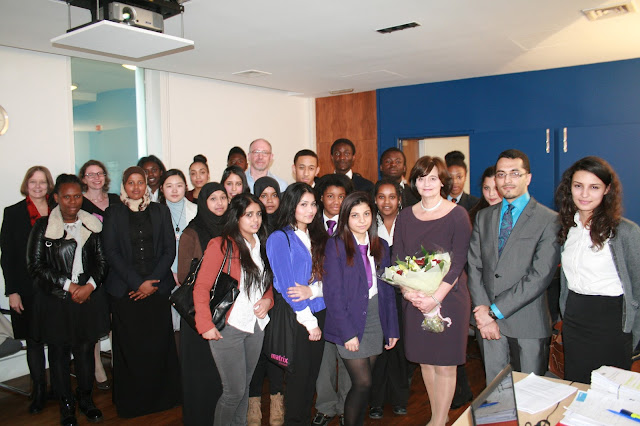 On Monday 13th May students from across the IntoUniversity network visited Matrix Chanbers to hear from their CEO, Lindsay Scott, and Cherie Booth in order to gain an insight into the Law.

We were given a very warm welcome by Lindsay, who told us about her own career in law - she warned our students that it would be a 'long haul' of study, but 'definitely worth it in the end'! We also learnt more about Matrix Chambers, which was set up with the aim of being different to more traditional barristers' sets. They make a point of not using obscure language and are very client-focused, and are renowned as being one of the best sets domestically and internationally. They undertake a lot of human rights and civil liberties work, often for the government. Lindsay took us through some of the high profile cases Matrix has worked on recently, including Leveson, Julian Assange, the Birmingham would-be bombers, the Mau Mau and Abu Qatada. Our students were certainly impressed by the breadth and status of the work Matrix takes on.

Next we heard from Cherie Booth, who is a member of the chambers. She was joined on the panel by Ayisha, a former IU student who is now fulfilling her training contract at DLA Piper, and Reem, another former student at IU North Kensington who has taken a graduate diploma in Law and is now doing work experience with the aim of becoming a solicitor. Answering Reem and Ayisha's questions, Cherie said that she came from a working-class single-parent family in Liverpool. Her mother had left school at 14, but gave Cherie a lot of support when it came to her education. Cherie said that in her position she needed a lot of determination to go to university, especially a prestigious one like the LSE. Thanks to her excellent degree she was able to get a scholarship when she applied to the Inns of Court, but she still found that she faced a lot of opposition because of her gender and background. Cherie spoke amusingly about her shock at being able to have regular hot showers at university, and about her first experience of port which had rather undesirable consequences.

Cherie advised our students to develop other qualities and hobbies which would help them when applying to study the Law - she suggested activities like mooting and drama which help to develop communication skills. Our students were then given the opportunity to ask further questions on Cherie's reasons for choosing LSE and for wanting to become a barrister. When asked about what she enjoys most about her job, Cherie said that she loves law because it is a real way of effecting social change. It is challenging and interesting, and she also loves winning! Rob Line, Team Leader at Haringey North, asked Cherie the question we ask all our speakers - what was her favourite part of going to university? Cherie replied that she loved the independence, the amount of things going on in London at the time, and the opportunity to meet different people.

Thank you, Cherie and Lindsay, for an inspiring afternoon - perhaps some of our students will be able to join  you at Matrix in the future!

IntoUniversity is driven by five values